I didn’t have a plan. Honestly, I went with an open mind as to where we might go. When we met up midweek Geoff the Pikestar had expressed a wish that we should go somewhere different to the usual. I thought we might just go with the flow and be led for a change. The “we” in this case was Rose and myself. Ronnie had opted out of this trip as he was being a lightweight traveller and not bothering to get to the game from Heathrow after flying home form the states in the morning. That boy has no dedication. One can only hope that Rolls Royce appreciate the commitment he gave to the cause on his jaunt to Oregon. Rose took up his tickets for both the train and the game. We caught the 7.54 from Severn Beach and met up with fellow travellers in the station buffet bar at B.T.M. for a team Ultimate Breakfast. It was certainly a special breakfast that had special reworking to make bacon and sausage / egg butties for later in the day. It truly did make for a meal to set one up for the day. The 9.30 departure had our gang of Rose, Stedders, Peter de Meteor, Geoff The Pikestar, Coventry Bob, Mumbles, The Silver Fox, Denis Law, The Real Lord Powell and Tangent Tim ,all split between two carriages.

The word was out among our team to walk past the police and meet up at the White Rabbit from where we would sort out our plan of action. If asked, we were off to the Ashmolean. This pub, the White Rabbit not the Museum, was due to open at 11 and we reconvened just before arriving at the door. It was well and truly closed and unlikely to open until 12. Irksome point number one for the White Rabbit. If you advertise an opening time it only annoys people who travel to get to you when you change that time.  No problem, we thought, let’s walk to the Lamb and Flag. Guess what, it too had a 12 opening time. Similarly the Eagle and Child, so we trudged on into Jericho and settled on an 11.40 start at the first pub we found open. 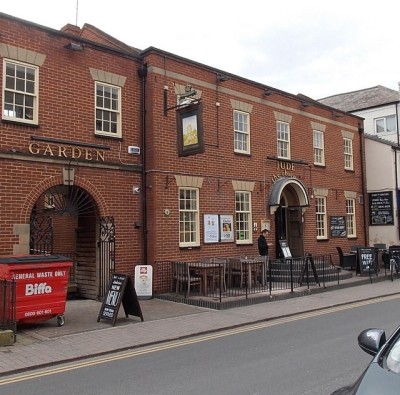 The pub was pretty empty and we had plenty of room to set up camp for a group of nine. This is a Greene King pub with absolutely none of the reputed Jericho Bohemian atmosphere. It is roomy, rather unremarkable in layout and dull in beer choice. It was perfectly comfortable in the style of a typical GK food based hostelry but not a pub to revisit in a hurry. We had now decided that the plan was to tick of a few within easy walking distance and get an earlier than usual taxi to the ground. Geoff described his next choice and we set off to:- 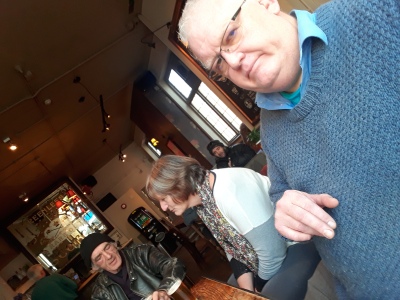 This pub had a slightly more interesting selection of beers and a more interesting internal layout but still offered nothing to write home about. (Stupid sentence for me to write as I am now patently writing home about it). One of Rose’s many talents is her ability to draw people in to conversation. Within a few minutes she had set the Silver Fox into a brilliant explanation and description of his life with horses, dogs and horse and carriage driving. He held centre stage with tales of training and his many injuries from his daytime life. He hasn’t been on many trips this year and it was good to just sit and listen to his tales. We left for our next pub with a brief description of how to get to the next pub for those who were struggling to keep up. That was a pointless exercise as of course they didn’t listen and couldn’t follow the instruction to turn left even though a sign at the end of the road named the pub at the end of the street with an arrow and distance pointer to follow. 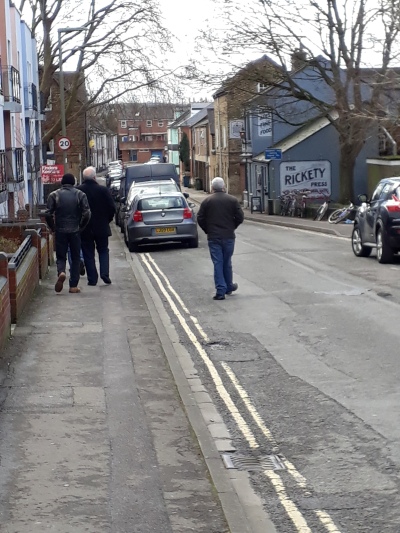 The Rickety Press is not hard to find.

The pub was very busy with students and their parents. It is what I expected of a Jericho pub. It is a little quirky with pizza box drawings on the walls, a table football table being used and lots of people showing off their new found local.  We found a bench large enough to accommodate the 6 of us who arrived first time. The others went to get something to eat but would arrive later. I quite enjoyed just listening in to the obvious chat of rival groups of students edging their way to more kudos as the most at home in the pub. My self-appointed task was to book taxis for 1.45, wary of Oxford traffic and congestion near the ground. All we needed was Tim and the café brigade to get to the pub in time. They did. I would definitely come to this pub again. The atmosphere was relaxed and not a bit as stuffy as so many Oxford pubs can be.

Three taxi arrived for 9 of us to get to the game between 1.45 and 1.55. Ours was the last to leave and first to get to the ground. Bob, the Silver Fox and Andy decided to go bowling before the game. Rose and I preferred a Bovril and tea in the ground. 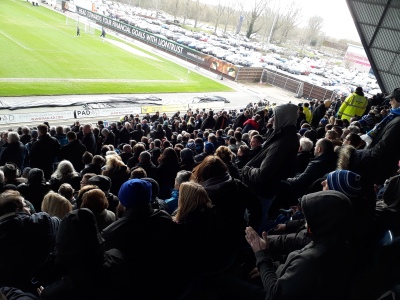 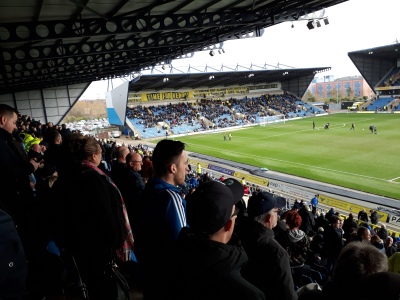 We had to sit in allocated seats. That would mean Rose and I being apart but we could swap and my seat was only 6 seats away. It counted for nothing as it appeared people were sitting wherever they wished despite the steward’s insistence. So it was that we found ourselves together but apart from the others of our group, among the lads who liked so stand, sing and fart for a few hours of party fun. It helped of course that Rovers were just superb, again. It was fun to be amused by the irrationality of loyalty as the children in front of us insisted that it wasn’t Oxford they thought was shit but the local housing estate. We had new friends who wished to get the Rose and Richard cuddle experience when Ollie and the Beast scored. Rose described the way Rovers played as strangely well organised and as if they had a plan. She may be an occasional observer but she is so correct. Rovers are now a really well organised side with a clear plan of how they will play. Ollie lost the ball twice and an old boy nearby said he always does that. Perhaps he too had not been watching Ollie this season. There was only one shout of “lazy” directed at Monty for not chasing a ball to the corner in the last minute of the match. We all waved cheerfully at the Bulls fans who were heading home with a quarter of an hour to go. We must have been really boring as most of the lads didn’t return in the second half, no doubt choosing to stand and point fingers across the netting from the bottom few seats of the stand.

Man of the Match: Ryan Sweeney

We had tentative plan to catch a 3A bus at 5.05 from Grenoble Road. All the others were in the queue when we arrived at 5.10. We did a quick assessment and five of us headed off to get a taxi from outside the local hotel. We raced the bus in to town and walked around the corner back to the:-

I don’t often get seriously disappointed by a pub that has rave reviews. Let me start with a positive. The XT Beer was superb. Being generous we can say that we did manage to get a space to sit around a table. First impressions really do count in pubs. On entry on a damp Saturday evening we were met by the overwhelming stench of pizza smothering cheese. At least half the tables were occupied by baby strolling young parents, complete with buggies who I felt might soon go the whole hog and change nappies on the tables. Of the tables where there was space to sit, the students sat at them had limited knowledge of pub etiquette when occupying what is, after all, shared space. And then there was the pub staff who were happy sharing in-jokes instead of getting on with their primary task of taking an order and serving up the beer.

We were able to do some post-match analysis and result sharing. Curiously the lower half of the championship table had more attention than the top of division 1. Cheese (the male Rovers fan) came to join us, to share some frankly unwanted toilet humour and then move on to amuse someone else. I was very happy to leave fairly quickly. I will give this pub a second chance but this experience was certainly memorable for so many wrong reasons that it may be some time.

The next choice was the Jam factory, near to the station. It was closed for a private party. On to the Kite, a firm favourite. It too was closed. I was getting tired and frustrated but we went next to the One. There was no real ale so Rose and I retired to the station café. The others soon followed having some solace in what they described as a slightly scary keg drinking experience.

Pub of the Day: Rickety Press

Beer of the Day: XT 8 at the White Rabbit

We were all going to take an earlier train home, perhaps popping in at Didcot for a final pint. Even that was not to happen so we ended up back at Bristol with an hour to waste before the last train home. Taxi it was then and guess what. The taxi driver was a City fan. We kept our politeness and resisted giving the poor man a hard time. He had his own problems to deal with but we were home by ten and could wave him goodbye with a cheery “Shithead” with a tip to get in early for a ticket at the Mem next season.