I had a plan, this was it

This plan had plenty of flexibility but a strict railway timetable to make it work or we might have had an extra night in a bed and breakfast in Wolverhampton. After some discussion the “I had a plan” became, “we had a plan” and it was the optional route that had an 11.21 first beer alternative that was chosen. There was never going to be any other thought when the team line up was announced. Present were myself, Bob, Ronnie and Lord Powell. In phone contact were Paul and Roger with Craig and possibly other Northern souls. At the Fleetwood end was old friend Colin who had scouted out the best pubs as he now lives there. Andy Gray was also on the contact list for letting know of our whereabouts.

It was weekend two of my charm offensive so I was determined not to get annoyed and to irritate the life out of the others by being oh so very nice. To let them in on the plan I also related, at Temple Meads the tale of Ali from Leon School when on a school trip to Great Yarmouth. Ali is now a well-respected restaurateur in Milton Keynes. At the time he was just one of a group of Bangladeshi students from a Bletchley Comprehensive on a trip to Great Yarmouth. He used the then often repeated description of his teacher when introduced to “Dirty Water” on the Beach at Great Yarmouth. It was “Mr Stedman, you BAAAAAD man.” For the day the team were either BAAAD or GOOOD men. 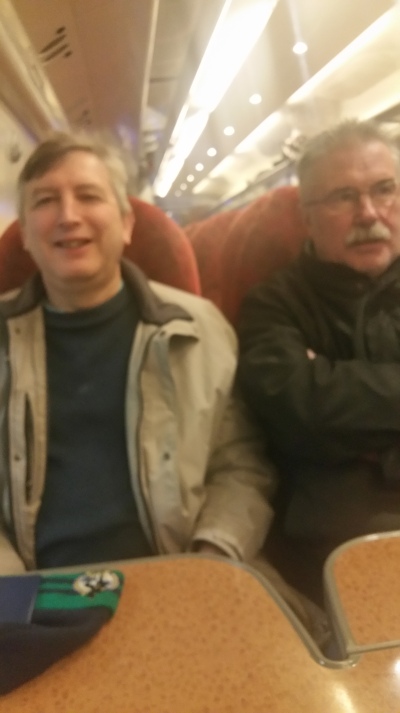 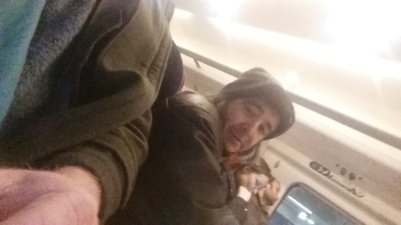 One aspect of the journey was the unusual lack of other Gasheads on the train. We were leaving early and getting back on the latest option. Lord Powell, he GOOOD man, had sorted a £27 return journey. Mr Powell, he BAAAD man, had given us just a nine minute change over at Wolverhampton. 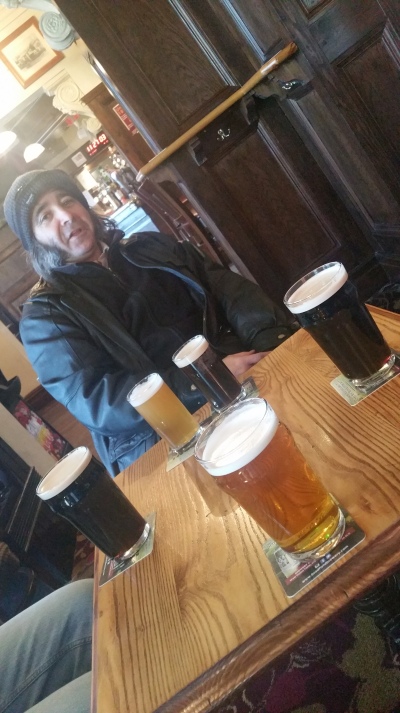 Serious half-pinting from the ticking Lord

What a great choice this was for a first stop. It is large, interesting and had a quiet late morning comfort to it. Themed rooms incorporated Blackpool football photos in one area and in our choice a chance to practice famous horse trivia regarding the pictures on the wall. Cross Bay Sunset (7) was my starter for the day. telephone updates suggested Paul and Roger would overlap as they arrived at 12.15. They were to follow us into this pub but we had left at 12 to jump into the taxi as per plan option 2.

The Taxi driver was a bit desperate for trade. We were his third and only the third pick up of the day and he was just £6 up in tips. He gave full value for the 20 minute drive with an excellent potted history of the Fisherman’s Friends dynasty, the monument set on the roundabout, info on the ownership of the Fleetwood club and the decline of the fishing trade. We booked him for the return trip should he still be willing to get a tip after the game. 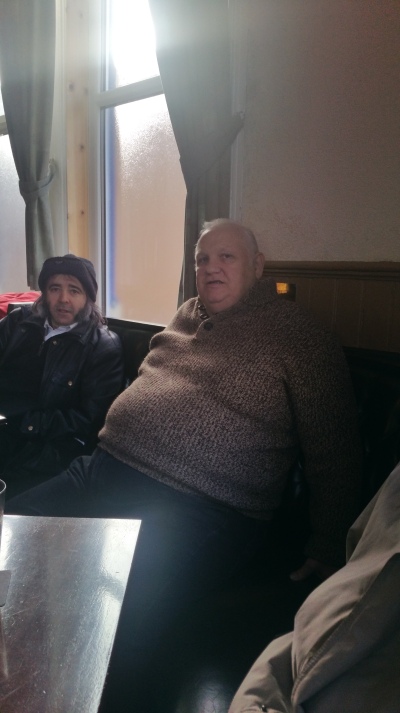 Martin getting a Colin update

Colin was at the bar waiting to meet us.  This was his recommended pub and his now local. He filled us in on the local pub news. Titbits like Sid Little moving on to Steamers, The Strawberry Gardens being less good than it was and how the service in the Kings might be a bit selective. We listened and went for our plan regardless. In the back room of “Dead Un’s” we sat and waited for the others to arrive. They never came. Andy Gray came in just as we were about to leave. We were happy and contented. The beer was good and the company fine enough. It must have been because we went through the list between us. It helped that Lord Powell was playing the half pint game so that he might tick off a few more beers. My contribution was to sample a Reedley Hallows First Trawl (7) and a Bank Top Lunar Halo (6). On the background T.V. the Gloucestershire overseas contingent were losing their big bash game. 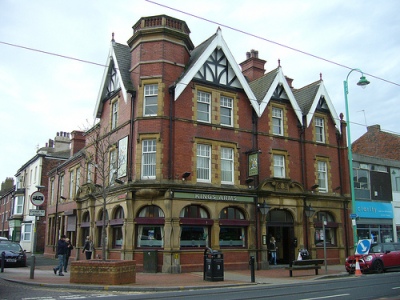 It is a two minute walk to, and in our case back from, the Kings Arms. It was busy, loud and fuller than the Royal Oak and had two decent Marston’s beers. The Lightfoot (7) couldn’t be criticised and the pub was fine. It wasn’t, however, what we wanted and the boys had done it before. It falls in to the “nothing much to write home about” category of pub so we returned quickly to our original tables and chairs in the Royal Oak.

A Bowness Bay Swallow Gold (7) was good. Colin introduced his mate who was going to watch the game with him in the Fleetwood end. We agreed to meet on the pitch or alternatively in the Strawberry Gardens after the game. 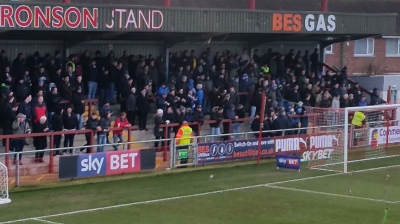 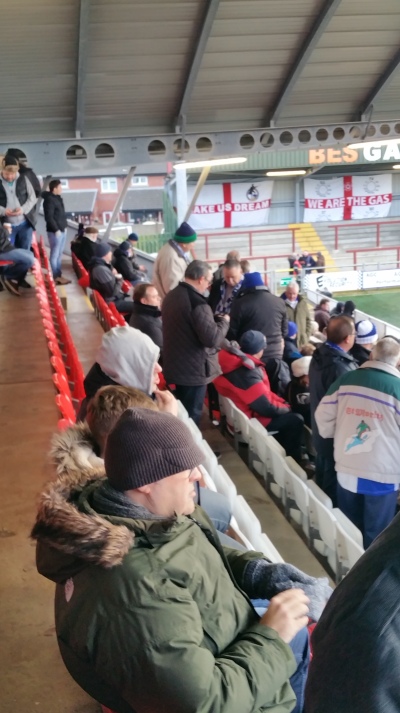 The 10 minute before photos

53% possession, 12 shots to their 6, 5 on target 1 goal for us, 3 on target and 3 goals for them. Stats tell you nothing. We played O.K. but no better. We defended poorly three times and they scored three times. Our front two had the off day of all off days. They were, using the phraseology of the day, BAAAAAD men.  Not quite. Their No 10 was a BAAAD man for feigning injury when attacking our innocent young centre half. Fleetwood fans are BAAAD fans for having a drummer to bolster what little noise they made.  They defended well, we didn’t. No amount of possession will guarantee a win when this happens. Oh for a boring 0-0 at half time in an away game. When we start doing that again then I am sure we will start winning away again.

One odd thing to note. We had remarked how few Gasheads were seen on the way. Yes, we had an alternative route but even in the town they were scarce. Then we arrived at the ground and the end was pretty full and it became clearer that many were on weekend breaks in Blackpool. My internal guess of a couple of hundred before the game was way out when the near 800 figure was announced. I can’t see the city taking 800 on Tuesday night. More like 80 will be my guess for the fickle freaks. 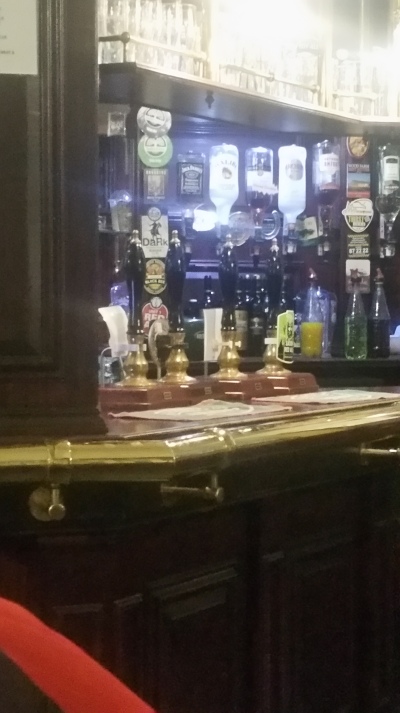 A pint of Marston’s Owd Rodger (8). That took me way back to my youth although it was only 7.4 % The Gas who were staying up for the weekend were in full attendance so we could catch up with some older friends. I was less than generous with the sweet smiling Colin who had a gloat about his side winning. I was not going to be deflected however and bought the man a pint for his celebrations. I volunteered to chase the taxi but need not have worried as the same driver was waiting outside and armed with inside information he would take is back by a traffic free route to Poulton. The pub was as friendly as ever and although the staff may have changed it served our purpose perfectly. And it had that great pint to remember. 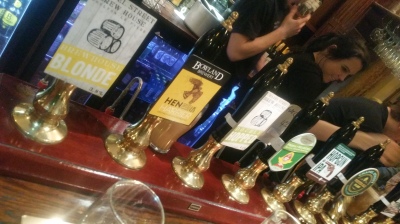 If anyone should ask where the people have gone from Blackpool pubs one might suggest they have all moved to having a night out in Poulton le Fylde. At 6 O’clock on a not very remarkable Saturday evening in January the pub was heaving. It had eight or so beers and large screens in most rooms. The buzz was from large middle to older age family and friend groups doing their regular thing and loving a pint or three before a meal in this market square town. It was as if they had laid on groups for us to chat with as well. We joined a party in the back room, just as another was leaving. Within minutes we had life stories and common friendships established through engineering and previous lives in Coventry. One might make adverts for the pub industry by sticking a fly on the wall of this place. We left for our train as yet more folk disgorged from taxis and cars through the bouncer less main doors. To top it all the pub was a rare outlet for one of my favourite beers of all time. Bowland Hen Harrier (9) was in tip-top form. I asked the opinion of our new found friends and they too were devout fans of Richard’s Clitheroe brewed nectar. In a claim for niceness beyond niceness I sickeningly declared that I was, for a few minutes, ready to stay there for ever and drink that particular barrel dry. My self appreciation was starting to annoy myself now and fortunately we had to move on.

Pub of the Day: Thatched house

We also found rounds of three beers for just over £8.

Only two things of note

I was able to help out the train trolley staff by offering ten pounds worth of shrapnel for his empty bag of coins.

We had an unexpected meeting of minds as we shared the train to Preston with Roger Radio. The Lord was suitably star struck but we were able to engage in conversation on his behalf.

I am sure the police have noted that Wolverhampton Station on a Saturday night is a potential football hooligan hot spot. We had to change there for the final leg in to Birmingham. Privatisation of the railways demands that three different companies vie for trade on that last little leg and we had an exclusion preventing us staying on the Virgin train for that leg. At the station we boarded a Midland rather than cross country or Virgin train among fans from Wolves, Aston Villa, Rovers, Brighton and Southampton. All milled around on one narrow platform looking for their train salvation. It was good that we were of the happy and non-chanting persuasion. It was all very silly but a sign of the madness of competition on the system. I have to say though, and this is very much tempting the train gods to bash us next weekend, but the trains were running almost to the minute, all day. All this with caring and helpful guards and ticket collectors along the way.

Ron and Bob managed to charm the legs off a serious looking band of Villa fans who at any minute might turn from good old boys to the friends you never really wanted to have at your party. The group apparently included Dave Bennett of Coventry fame. It didn’t take much for the Bobster to find connections with old friends who also had Parkside engineering connections.

Looking back on Sunday’s writing of this page it was a pretty good day out despite the result. We sort of agreed that smaller groups worked better but that cannot be a pre-requisite. I confirmed many decisions under constant Lord Powell nagging. I will not be signing up for next seasons shared card, nor doing a summer trip, nor changing to be a miserable git any time soon.

Rose picked me up at 10.35 and, for a few moments, all appeared right with the world