Breakfast by 10. Got up and read papers in the garden before all were down for the full breakfast. Yesterday’s game was good, it is always good to play on really good grounds like the one at Bath. Today is apparently very different. We are playing in a pub garden against a very good village side with special rules to account for the size of the field. Full breakfast to get over the need for a large lunch and a walk with Digger Timothy down to the viaduct and back.

Pub lunch was at the Wheatsheaf in Combe Hay. One pint of, guess what, Courage Best and a sandwich for me. Nick Proudman was in top form in starting the team games and fines. Avoided fines so far but will have to watch out this evening.

Dick’s Car to Winsley game. The pub is the Poplars in the nearby village of Wingfield. Significantly the Proudman car was late for the game and missed the instructions of local rules. The main one was that a six is scored when the ball hits the boundary walk on the full and is six and out if the ball goes out of the ground. This is because they would lose too many balls and annoy too many neighbours on the postage stamp of a ground. They batted first and scored a total that didn’t look that high. We were left needing 6 off the last over with one wicket left to win at the end. I contributed exactly nothing to the total. Nick Proudman came to the crease having apparently slept all afternoon. He slapped the ball for six, turned to take the applause and left to a round of questioning scratching heads. We were declared winners but by 0 wickets but Nick was given the task of going, naughty schoolboy like to the neighbouring house to get the ball back.

Back in the Junction we resumed the peanut and Guinness drinking sessions. There was plenty of Bedford Ath. Rugby club traditional singing and I got fines for slow scoring and lack of appropriate tie for evening wear. My biggest fine-worthy event went unmissed as I phoned Fiona from the telephone box on the main road without anyone noticing my absence. There was no reply as before.

The Poplars Wingfield today on Google 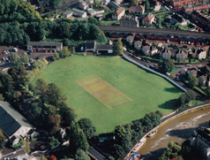 I was invited to join this tour by Dick Timothy, a legend of a teacher at Leon School. The club was made up of the cricket players of a famous Rugby Club in Bedford. It was a quality tour with games at Bath Cricket Club the day before. The next year fixtures included Calne and Bath Rugby Club. It involved a lot of drinking in Rugby Club style but that wasn’t a problem. We were staying at the very tolerant Junction pub in Limpley Stoke. Over the two years of my touring I managed to score enough runs to make it worthwhile being a ringer for them. I would probably have toured again with the chaps but my life was to change significantly in the next two years. At the time I was young and very, very, single.

August the 10th was exactly two years before I was married. I had met Fiona earlier in the year. I was however in something of a Fiona-inspired limbo. The meeting was at an end of school staff disco. I had played cricket in the afternoon so turned up to this staff event later in the evening, after everyone had been there for some time. I knew she might be there because Pete Gunn, a colleague, had mentioned that a friend of his wife Anne, would be coming from Aylesbury and she too had gone to University in Southampton. We had met each other at a party at their house a week earlier. She was stunning, looked happy and very confident when I made my very nervous advances. She had the attention of my best friend Alex at the time. Awkward? Not at all. We talked, we got on, and sadly danced to Baby Jane. For once I made sure I was relatively sober for a Saturday evening. There was however a problem. The school holidays meant that Fiona was off on holiday with her mother, to Rhodes, and to her home in Tunbridge Wells. I had nothing but her number and a promise to phone me back in August. So I was on a cricket tour hoping to be contacted but phoning a number of an empty flat in Aylesbury. The call I made while on tour was one of many speculative calls that were unanswered as she wasn’t at her home for the summer. Her call back came a week before the start of the new term.

We made a plan to meet in Leighton Buzzard. Fiona was coming by bus from Aylesbury, I was on a train from MK. This was in the days before mobile phones so when her bus didn’t arrive I was left with the option to either wait in the hope it was just late, or go home. I walked the mile from station to town three times, in a dithering panic until eventually I found a bus going to Aylesbury. The driver said the last bus had been cancelled. The next bus would arrive at 8. I expected her to have cut her losses and gone home. I waited in puddles of self-pity until the last bus from Aylesbury was due to arrive and didn’t. I was walking to town for a final time when she appeared walking towards the railway station. Neither of us had given up. We had about an hour before the last bus home, which she caught. I went home a very happy man.

I said I was living the life of a single man. Part of this was the attentions of Sue who lived at the end of Hadley Place. She, like me, was a teacher, of French in her case at Stantonbury School. The next day she told me she was going to cycle around Willen Lake. I was on my bike to find her. I caught up with her and with schoolboy enthusiasm announced that I had met the woman I was going to marry. It was a thoughtless and rather arrogant statement and she obviously wasn’t going to be my best mate when I described Fiona to her. I proposed to Fiona twice, once in Leighton Buzzard town square (refused as a stupid idea) and a second time over a beer in a pub.

The Single man no more. London hence shopping at BHS and British Museum.

The two years of courting Fiona involved the following social events. She was a middle school teacher in Aylesbury and I lived 20 plus miles away in Milton Keynes and neither of us had a car. The X15 from Aylesbury became well used as did the train to Leighton Buzzard. Post sports games she would often come to MK. For a few evenings we would go to the Pink Elephant Night club in Dunstable or the Black Lion in Leighton. Tim and Karen Plumb led the way with lifts to the former. Fiona had high maintenance costs of Gin and It as a drink of choice. Back in MK the usual meeting point on a Friday evening was the now long gone .Rose and Castle pub in the market area.

The X15 at Aylesbury

Fiona had to put up with plenty of selfish behaviour from me. I played Rugby every Saturday in winter and cricket at least one, if not two, days at the weekend in Summer. She was a very conscientious teacher and would work at least one of the two days so I had to change and give her my time when she did make it to my home. We rarely went out in Aylesbury, that wasn’t a loss for either of us. I was lucky that our social life was pub related. At the time I had little knowledge of her love of Football. We walked miles at weekends, usually to a country pub. I had to learn to be the friendly boyfriend in Middle School Social events at her school. Things soon changed as redundancies loomed within 1893 Education. Fiona was last in and as such was redeployed to Milton Keynes when the cuts came to her school. St Mary Magdalene School in Greenleys was newly opened and it made sense for her to come and live with me. It also meant she would say yes when I asked her again to marry me.