I can’t wait for this job to be finished. I got back to Pritchatts Road around 12 and decided to do some leafleting this afternoon. We are targeting the terraced streets of Kings Heath and Selly Oak. I have to hope that one in a thousand take up the offer of a new damp course as the solution to their Edwardian house damp problems. I have no idea if what I am offering is any good but they are paying me 1p per leaflet posted for the rest of this week. I reckon I can get around 5000 delivered by Friday. On Wednesday I am helping on one successful job in Selly Oak. We have to lift the floor boards and work from the inside on the new damp course. I have no idea how that works either and to be honest, I don’t particularly care, as long as it is legal and I get paid. The money will pay for the tickets to the test match on Friday. Studs and Mas are coming up to watch the second day of the test at Edgbaston. Studs is bringing a copy of the Thornbury Gazette. It will have a report on the game last Saturday. I know what it says because we wrote the report, but it is good to see it in print.

Went for a pint in the Plough in Harborne. Got back to find the post had details of possible accommodation in Milton Keynes. I will leave this to next week and go up to check them out in person. The job offer recommends getting somewhere to live in Bletchley and there are schemes to provide key workers accommodation. I will need to check what that means with the council.

No one left in the rooms. Will need to move out by the end of the week after, by the 8th of August.

The job felt really dodgy. It was for a couple of weeks and involved identifying areas of Birmingham of  a certain age, i.e. Edwardian, and delivering the leaflets that encouraged owners to get a damp course in houses that basically didn’t have one. There were grants available to pay for it but it relied heavily on good will and the reputation of the builders when the work was done. What I had was a map and the fitness to run around the area rather than walk.

My record of the cricket.

From my programme collection

My scorecard for this day

The day started with England 189 all out, and Australia 19-2. On the day we watched Australia scored 258, a lead of 69 and England in their second innings were 49 – 1 so just 20 behind with 9 wickets standing. The best of the game took place on the days that followed including Botham taking 5 for 11 as Australia were bowled out for 121, 29 short of their target to win. We were there at a famous test, just on the wrong day.

The Gazette did arrive and this is the report. The grammatical errors were all mine and the writing is embarrassingly poor. I remember the game was played at6 Golden Hill in Bristol and the ball was swinging all over the place. Old Cathedralians. had a rather arrogant loud chap who played the “I’m better than everyone else card” badly. It was good to clap him off for a few runs and an insincere “well played old boy”.

Pilning notched up their second consecutive win on Saturday thanks to another fine all round performance. The visitors batted first and were indebted to a fine innings of 58 from Richard Stedman that provided the backbone to a total of 133 all out. Don Baker (16) and Peter Kingscott (14) also made valuable contributions but Stedman was the only one to come to terms with the bowling and wicket.

Yateley and Thomas took four wickets each for Old Caths. who were always struggling against the seam attack of Chris Studley and Colin Reeves. At 20 -5 after 15 overs Pilning looked set for a comfortable win but stern resistance held the victory up before Gerald Smith struck.

Removing the heart of the middle order he took 4 -24 before Reeves returned to mop up the tail with 4 – 14 from 14 overs as Pilning won by 34 runs with just one over to spare.

I had a few regular pubs we used in Birmingham. The Plough and the Bell in Harbourne were the most used. When we went in to the city centre we frequented what we called the “Benny Pub” just off the Bristol Road. Benny was Benny Hawkins from Crossroads played by Paul Henry who was pictured on the walls alongside many other celebrities from the A.T.V. studios opposite. The White Lion is now long gone, apparently a “Gentlemen’s club” called Scarlets. The Bell was very picturesque having a churchyard backdrop and bowling green, perfect for a late summer evening pint such as was needed this day.

The new job was at Leon School in Bletchley, Milton Keynes. I was to be the new Geography teacher in a small department of four men. The new team was John (Wyatt) Earp as Head of Department, John Buchanan, Duncan Hume and myself. John soon left and Kevin  Stork joined us. In the five years or so the Geographers became younger and included Shelagh as our new Head of department. It was a good school in which to start. It was never easy here but I was there to learn and develop my own style. Some pupils made that seriously difficult. Thank you Sarah Brockman and 3 Red who were determined to give me a working over every time we met. The timetable included some odd lessons such as D.O.E. with five students in the room next to the staff room. I soon learned that it was a good idea to get what was the school’s most difficult students out of that room and well away from not so supportive colleagues next door who amused themselves with the fact I had taken their problem students with an unknowing smile. I was also the butt of initiations in P.E. lessons as a second subject. Of course I should have seen it coming when Rick Townsend asked me to stand at one end of the small gym with fifty students at the other and then shouted charge. I could only laugh at the bottom of the mass teacher dumping session given the name of British Bulldog.

What Leon school had was a sort of new start with a new head and several new teachers that year. The teaching class of 1981 included these friends and colleagues. The new Head was Bruce Abbott. He was my sort of Head; kind, honest and pretty fair. We were to come to be political rivals when a few years later I was the N.U.T. Rep. and the school was closed for days on end by the teaching strikes of 1985 / 86. We had three day rolling strikes and co-ordination with the NAS/UWT rep, which meant we had the school closed for four days of the week. I don’t think it was any surprise when I was given a very good reference for my next job away from Leon a year later. The other teachers turned out to be a pretty good set. Paul Salver is still there teaching History. Debbie Parks (Maths), Jean Chambers (PE), Mr Potter (Science) Simon Scudamore (Science), Mike Keylock (Languages) Diane Sterne (Science).

Here comes my next top ten:-

Top ten teachers I have known and taught alongside.

You should note that most of my teaching was at Denbigh School and this was the highest regarded of the places I taught in. You can see perhaps that those in more difficult schools generally had my higher regard. This was not the case in my last school, Prestwood Lodge.

A week later I had put down my deposit on a room in Pencarrow Place in Fishermead Milton Keynes.I had a top floor room to let with a family. It was in walking distance of the city centre and I could ride the four miles to work on my cycle using the Redways. The bike lasted three weeks before it was stolen from the back garden shed. I lasted one more week before the promised flat became available with the other teachers, nurses and probationed criminals in Granby Court. Paul Salver also had a flat in one of the blocks so we could at least talk teaching stuff over a beer in the communal bar that needed this teacher to get involved with running for a while. By January the next year I had a deposit paid on my first house in Bradwell Common. Newly built under a shared ownership scheme I had the words of Pete Kingscott ringing in my ears. “If you get a chance to get into buying your own house, do so. “ For a 13K share of a 22K two bedroom house I was on the property ladder and catching lifts with Jean and Debbie to work. I sold my moped to pay the £100 deposit to Taylor’s and chose a corner plot that was a show room. Milton Keynes was being very kind to this new key worker I wasn’t a particularly good teacher but I was able to develop that essential thick skin for a career in the vocational profession. 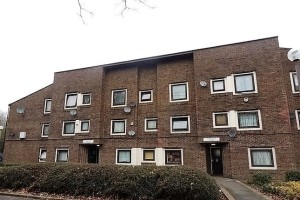