I quite liked routine at this age. This 10 year old appreciated a bit of order at school so long as he could be doing some of the ordering. I had been moved up to the oldest class along with other bright pupils like Chris, Muriel Smith, Hazel Miller and Hazel Meachin. While Chris stayed at Pilning the Hazels, Muriel and me  were destined, it seemed, to be in the same classes from then on to the day we  left school.

The photo here is from the year before. The Teacher is Mr Taylor and the class names as best I can remember are:-

Story book – Stig of the Dump

Spelling – words to do again

Singing in the hall

As a pupil in Mr Lewis’s class we had a set routine for most days. There were no special events or modern teaching methods but lots of routine. We worked through schemes for Maths and English, each having numbered and coded books of exercises. Most days would have some Maths, English writing, a spelling test and best of all a general knowledge quiz towards the end of the day. Here is a sample question. “What would get you to New York before you left?” This was thrown to the group and this smart arse would be allowed to wave his hand in the air in anticipation of giving the correct answer. The week was broken up by games lessons and music singing in the hall. By this time of the year the school choir would be ready for the annual concert at Bristol Colston Hall where everyone from the schools of the Bristol area came together to sing. I was not a good singer but I am sure our rendition of “Boney was a soldier” was not meant as a classical masterpiece. For P.E. lessons we would either do games and P.T. in the school hall which was not good but better than nothing. Alternatively we might go to the Pilning Playing field for full-on football matches. This involved carrying the goal posts in their component parts and assembling them on the pitch in holes that appeared as if from nowhere. The older boys on the class were good footballers and made games good fun. Some were in their last year, i.e. two years older, but it didn’t matter because we were all pretty good. They used to take the mickey out of my boots and this gave me my first, and still sometime used, nickname of “ooofy boots” or “boots” for short. The boots in question had exposed leather toe caps that must have scared the wits out of anyone wanting to risk being kicked. While some boys could show off their brand new George Best Stylo Matchmakers my boots didn’t even have a maker’s name. What did I care when no one would get near me to make a decent tackle? It also helped being several inches taller that even the oldest boys.

One other regular event of Mr Lewis’s class was our shared interest in cricket and football. This was evident in the Monday break time listening to the FA Cup draw. We would all gather round the class radio to listen as we were drawn to play Bournemouth, Peterborough, Kettering, Bolton Wanderers and then Everton in the fifth Round We eventually lost 1-0 at Everton. Chris Kettle would listen out for Swindon Town, Chris Studley for the City but we mostly were Pirates. We were so jealous on the Monday when Shaun Lippiatt came in to school with Choke (Chris Oakhill) and announced that they had gone to the Everton game. He had a programme to prove it and that was enough for the rest of us. We had a playground game that dinner time and he was in goal as usual. He had no chance and shots rained in on him rather the goal.

Our terrapin classroom was separate from the rest of the school and had easy access to the school field area. It wasn’t a big space but it was perfect for games of British Bulldog. It was never as bad as people made out and should you wish it was easy to get caught by a mate and avoid the heavy bit of being bundled by the whole school as the last on standing. The trick was to hang back and spot the gaps and avoid the girls because it just wouldn’t be right to be caught by a girl.

The School  team with Mr Lewis and Mr Tutton 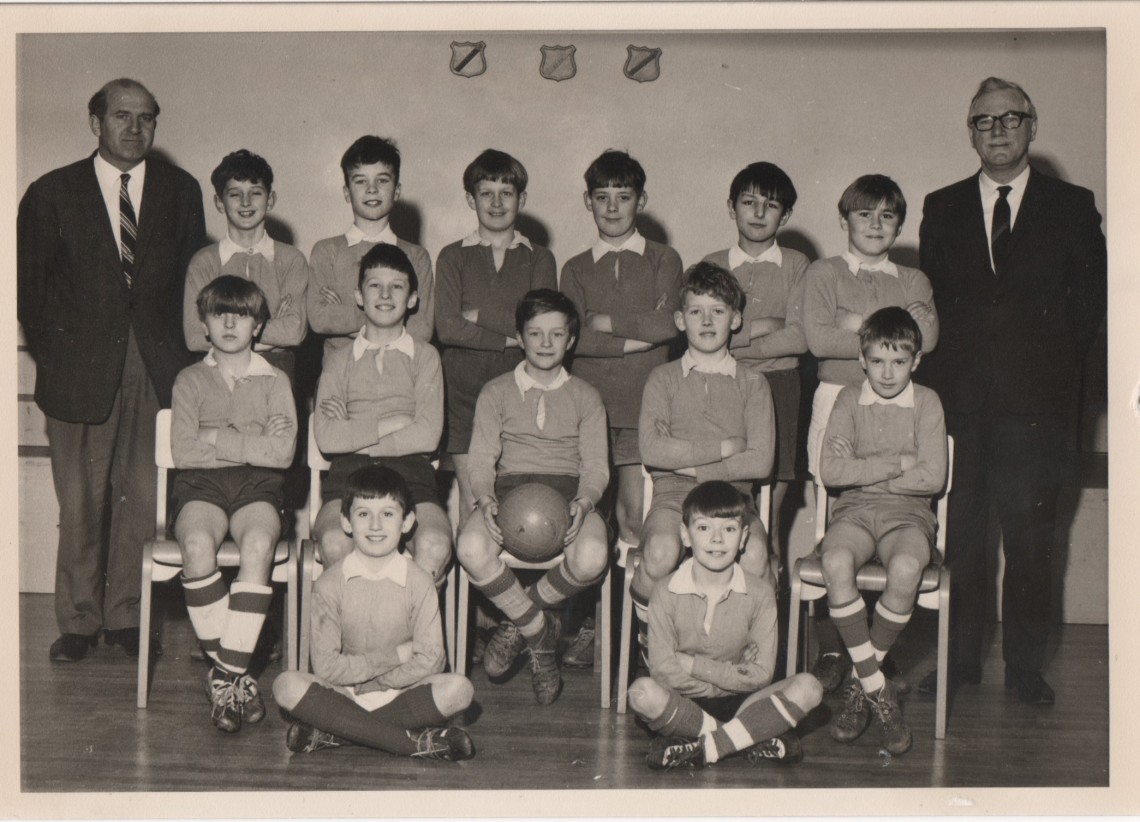