Or: Is it really 51 years of watching the Rovers?

If I had the mind of a conspiracy theorist then I might suggest an election for Bristol Mayor is on the horizon.  My theory would comment on the coincidence that, for the second time running, the Bristol Transport system worked like clockwork and I arrived seamlessly in the city centre with half an hour to spare. My twitter feed is full of the red trousered one hailing his own successes and I half expected him to pop up on the city centre and welcome me personally for my afternoon of Bristol merriment. The plan involved meeting old friends and new and, as luck would have it, the first pub opened at eleven and we were all in the pub some time before regular opening at 12.

First in was Ted Blair. Ted is a legend in Football and Real ale circles as is his mate Steve who was due to meet with us on arrival from Cardiff. Real football fans will remember the best website for checking out pubs in the lower leagues was DAFTS. The Darlington Away Football Travel Service was run and written by Steve with heavy research input from Ted and his match day photography. We go back a very long way as beer hunting friends. From finding the Wenlock Arms for the first time, through crawling around Darlington in my research years to later taking recent recommendation on the best London pubs. These two know pubs and football and have suffered more than most as their team has experienced a tale of decline that very few can match. Take today for example. The game they might have watched was postponed because the opposition wouldn’t agree to a rearranged match on an artificial pitch, as is the way of real non-league football. Today they were in Bristol to watch The Algorithm at the Thekla while also filling in their Bristol knowledge with visits to many new, yet unvisited, pubs.

Ted was already in place and working his way through the beer list two halves at a time. I settled on a Bristol Beer Factory Milk Stout (8) before Right Wing Ronnie and Coventry Bob arrived. They looked a little miffed that we were there already but they were quickly into normal mode. One interesting spot was the observation that the pub does breakfast. This might well break the Wetherspoons monopoly on their pre pub spending. Introductions were made and reminders of past sessions were soon revisited. Ted had led our team on beer crawls via a legendary Darlington Beer Festival. We had also briefly met earlier in the year at the Euston Tap. Ted, when talking of his Disney life, drew out memories in the boys of schoolkid comics. Apparently Ron was a bit of a fantasy hero magazine collector. Why am I not surprised? I gave Ted my maps of Bristol pubs that highlighted new ones and ones not to miss. We then moved on to Bob’s recommended second pub.

Bob had visited recently but for all of us it was our first time. It is apparently a second venture for those who run the King Street Brewhouse. Here, however, the beer was limited to one real ale and the emphasis was clearly on food. Steve arrived to the party from his train and we went through much of the conversation so he might get up to speed with Bristol Beer thinking. The BBF Twelve Apostles (7) was an Australian IPA. I believe in time the first pub will be providing beers for the second. Only time and working brewery kit will tell. 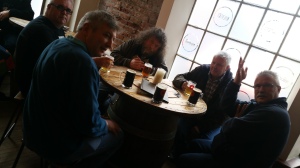 As you know I like this pub and it did the job as usual. It was surprisingly quiet and thankfully more comfortable for the chat and drink session we like. The DAFTS chaps know of and enjoy the other pubs of those who run this pub and it wasn’t the usual shock to their systems that two thirds and a keg/ cask mix offers to others. I went for a BBF Milk Stout that was honestly as good as the earlier version weighing in at an 8 again. Mumbles was already there to meet us but could hardly claim any tutting points. At 2 we walked around the corner to a taxi and we left Ted and Steve to their long day of pub research. Their next steps would take them to the Beer Emporium. Ours were to the ground via the clubhouse bar (not me), pasties and ten to three photo rituals.

The first half hour followed the usual for home games of late. We had the chances, possession and surely it was only a matter of time ‘til we went ahead. As of last year Matty T missed an open goal, the crowd became increasingly critical of stray passes and a general state of worry, last felt this time last year, entered our thoughts.  Then Rory scored and a collective sigh went around the ground. After half time things went somewhat pear shaped for a while. The team “played deep” and seemed happy to invite the Yeovil team to play with some space. Leroy Lita came on and of course as an ex Ted with traditional welcome, scored to add to the nerves. A scruffy goal won it in the end but who really cares how it is scored. In reality I think we should have won by three or four, what with lobs over keepers going wide and shots blocked by impressive last ditch challenges. As it was the luck was with us as the final attack ended with a header on to the crossbar and a relieving boot up field. Some classic Downs league comments filled the air in encouragement this afternoon. “Get Under ‘em”, “Travel, travel”, “clear the lines” and a genuine “boot the ball” were heard. I couldn’t resist a “Put it / him in the stingers” myself and rounded it off with a cheery “well done my babbers” to the boys in blue at the end. One special mention must be made regarding the half time draw. Mr Andy Bowen, our Andy Bowen, our Mumbles, was announced as second prize winner of the fifty-fifty draw. He was on the pitch collecting an envelope with a tidy £100 inside. A great result that was later topped by a twitter feed suggesting our very own Hackney Haze of now Wimbledon fame had a similar half time win in Kingston of a mightier £500 quid.

Man of the Match:  Steve Mildenhall

It was a special collecting of minds in the bar after the game. The Good Lord Powell has recently turned fifty and had gathered together his friends to share his Bristol Rovers cake. We dutifully joined in the happy birthdays and sample the good fruit cake with Gashead icing. The results confirmed it had turned into a decent results day. Oxford lost (surprise), Accrington drew (a relief) and Plymouth beat Portsmouth away (A shock, but a draw might have been better). Two points now separate five teams and we sit in third. I can’t see games getting any less tense and the resolutions are now set to not get too critical when we play poorly. It is all about the result.

A later than usual visit followed and the pub was as busy as ever. I eventually squeezed into CAMRA corner and chatted with the team that include regulars Pete, Sally, Andy and Larry. The boys sampled at the bar. I enjoyed an Ashley Down Porter (6) By 6.30 it was time for town for the chaps. Andy, Bob and Ronnie headed for the No 76 and on to Crofters Rights. I stood at the roadside and Rose’s anticipated arrival for our own evening of revelry. We were off for a different Saturday night. Her work colleague is a talented singer, flautist, song writer and band member. We were off to see if she should give up her day job.

We arrived to a reserved table and a chance to eat before the music started at 8. Jenny was lead singer for the Yellow Mountain, her three piece folky band. Richard Lobb played as a solo artist and c.d. toting singer songwriter as well as guitarist and beat box drummer for the band.  His set was amusing and good enough for us to part with a tenner for the said c.d. Then Jenny and a double bass player took to the stage. It is not just as an acquaintance that I talk up her voice and performance. It was haunting at times, beautifully expressive and the self-written songs challenged the audience to listen with care to the lyrics. I enjoyed every minute of the performance that ended with a rarity of flute solo pieces played in true jazz/ folk style.

I hadn’t had a moan all day. I was in happy mode and for once was content with life. Nah, I take that back. I had one major gripe. You might guess a Bristol Café Gig would have a fair hippy quotient. So it was that I had the displeasure of sharing my personal listening space with a happy three year old who wished to sing throughout the performance and of course shout encouragement at all the inappropriate place. I have no particular qualms with this, it adds something to a desired family atmosphere. What I disliked was the parental attempt to pacify this child by playing swing and rotate the tot to such a state that the child would either fall over like a drunk in a pub, be sick over the nearest person, or scream delight for more. I lost my will to smile by the time the mother left, probably to deal with latent vomit on her workman’s boots on the way home.

Pub of the day: Small Bar

NEWS FLASH; Late text from Ronnie. 5-2 up- on table football in the Crofters Rights. He choked again and lost 10-7. Will the boy never learn?

Next up: Stevenage A Tuesday 19th April 2016 Meet at Our Mutual Friend?