Or: Doing the tourist thing in Portsmouth.

This was to be a different weekend with Football thrown in the middle. For once I was going to drink and socialise around the game rather than because of it. Rose could do with a weekend away we thought. My niece and her family, who live in Worthing, wanted to watch the Rovers for the first time. They were coming by train. The usual chaps were coming by a bus replacement laden train service. There were elements of youthful nostalgia to contend with in visiting the city of my earliest family holidays.

We arrived early evening to the Keppel Hotel. This was an experience in itself. We decided by the end of the weekend that there must have been some sort of social enterprise involved in employing the elderly male cast of a version of Acorn antiques to run this hotel. The room was large and classically station hotel in unplanned shabby chic style and had just about all we needed. 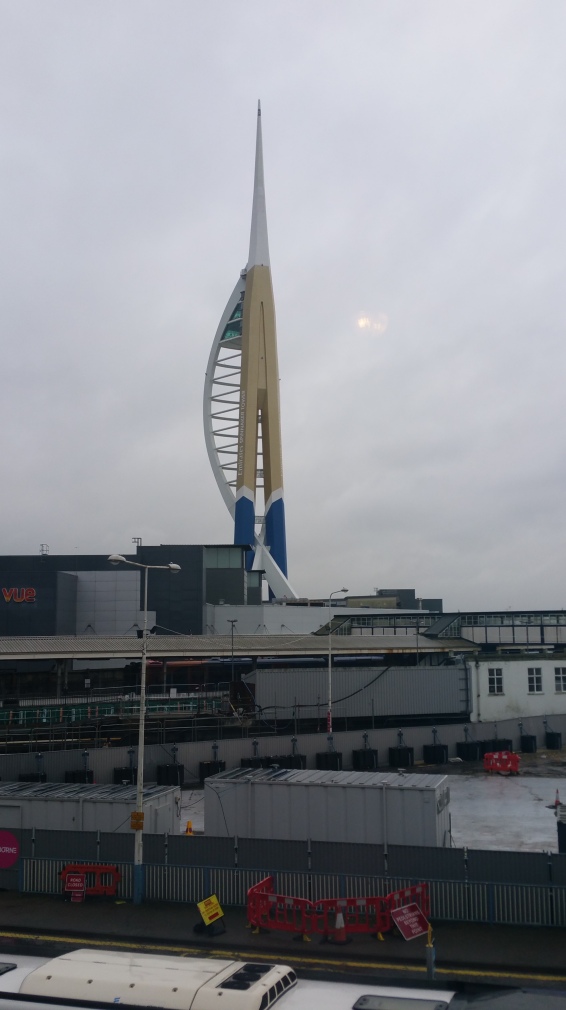 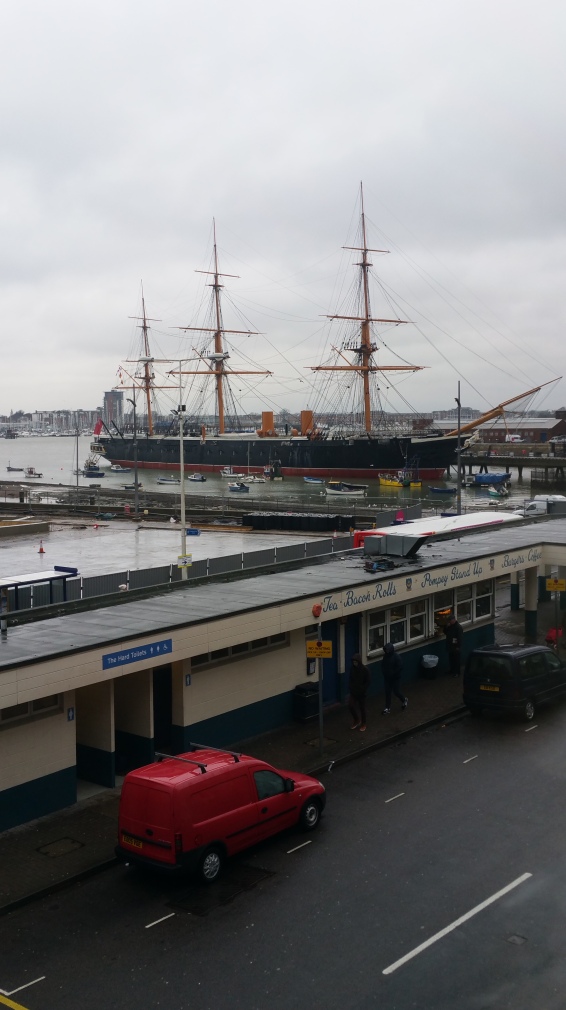 The Hole in the Wall

This was top of my personal hit list of pubs to tick off. Whenever I had visited during my guide researching days it had been closed. It ran mid-afternoon opening that didn’t fit with my town strolls. We arrived for the full early Friday evening experience. It was busy, chatty and finding space to sit required Bag of Nails style subterfuge. I settled for a rare 4% dark beer from Waen. This “Drawn to the Deep End” was as good as a recent local POTY should serve. Unfortunately the tide must have been high because the pub, and street within which it stood, had an all-consuming sense of blocked drains and unmoving sewage. I am sure it was no fault of the pub but it did affect my personal ability to sit and drink. Fellow Gasheads, Clive and Ann, arrived just as we were moving on. This was a theme for our weekend that was often repeated. 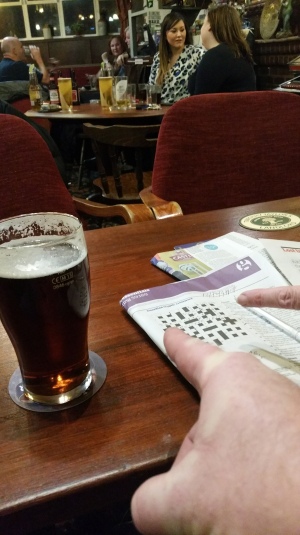 This pub, along the road, had a solution to the local miasma. The bar was powerfully drenched in the mists of shake and vac. It was an odd relief and the beer was good. One room was given over to a private party. We were comfortably able to sit and sort out the crossword and go down their beer list in the other room. The Gales HSB was sampled for personal nostalgic effect. This, now Fullers brew, was my earliest example of a must drink beer, way back in the University days. Those early CAMRA days also had the local bests of Whitbread Pompey Royal and Eldridge Pope Royal Oak to find. Local beers feature here so my follow up was an Upham Winters T’Ale. Clive and Ann arrived as we left
The walk back to the base was planned to take in something on High Street in the Old Town.

I should have researched this better. It was all my fault. I deserve to be lambasted for my error. I should just have just known when I turned the street corner. The Dolphin lies opposite the Cathedral in the Sally Port toting tourist area. I should have spotted the faux bottles on the tables with candles and dripping wax. I should have noted the tourists nursing half pints in mysterious corners. It was obvious once we sat down that the clientele were similar one time visitors to the pub. There were no locals, nor students. I found out when I handed my tenner over for a pint and half of the 4% Hogs Back Farnham White. £4.80 a pint. I smiled, then giggled, then roared with internal laughter at this cost. £4.80 a pompeying pint. I read today that this is a special brew, exclusive to Enterprise pubs. Well they are welcome to their exclusivity. This tourist won’t be drinking it or here again. Then again, they wouldn’t care. And no amount of staff wearing ties and dress shirts will make me feel the beer, good as it was, merited that price. I prayed that Ann and Clive were not following us. 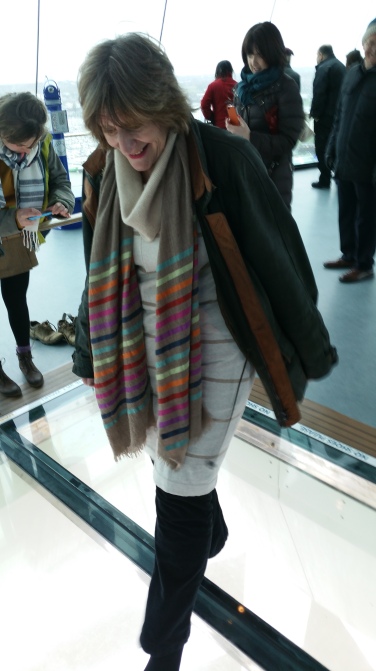 We could see it from our bedroom window. So too H.M.S. Warrior. So Warrior? Spinnaker? Spinnaker? Warrior? Spinnaker it was.
If we went up the tower we might see the hotel from there. Rose wanted to walk on the glass ceiling and drive the speed boat. I wanted to point out places we visited when we went there on holiday in the sixties. So it was that I pointed out where the Ark Royal would have been on Navy Days and the site of Granny’s house before the motorway was built. The Speed boat didn’t work, not even for the youth who knew about these things. Rose walked on the roof and yes, Clive, minus Anne, arrived just as we were getting the lift down at the end.
Having an hour to kill we decided to take the circular bus the long way round. This is an old trick of my past for cheap touristing. We then headed for a tea in a roadside café. We were due to meet family at 1 at Fratton Station.
Ronnie and the boys arrived on the train before. They hazarded their self-important thought that we had travelled to the station to meet them. Ah bless, a flash back to pre-mobile phone days. No, we asserted, we had come to meet with a couple of young chaps, aged 10 and 13, their parents and grandparents, one of whom happened to be my sister. Today we would be doing our own thing. They trudged off, for once without their grumpy beer partner.

Much better internet research by me for this one. It was described as family oriented and friendly. It was also very close to station and ground. The youngsters were welcomed as if one of the regulars. They appeared comfortable, as also their parents in this fan mixed pub. The Wee Mac 80/- flattered to interest. The Butcombe beer follow up did well. Phil the Lion came and scared the parents with tales of forthcoming intimidation and violence. We sought out London Gas for news of the ever missing Paul Davis. There are three Paul Davises in our friendship groups. The London one was a neighbour form Severn Beach Boy days. A plausible explanation came in tales of recent weddings and texts of him walking this afternoon instead. I could only think that the perfect Valentines weekend for a newlywed would surely involve watching Rovers in a South Coast naval town of international repute. Perhaps not.

We were all in the ground by 2.15. The family were in the Portsmouth side. They had tickets for the North Stand, lower tier. They were just behind the group of finger wagging, sign inventing, Harry Potter loving, Pompey Hoolies. I worried for their sanity but not their safety. Rovers made sure they wouldn’t create any embarrassment by never threatening to win thus exposing my sister and husband to the choice of cheering or not when they scored. So inept was the second half performance that they probably converted potential Gasheads to Pompey devotees. They were though right to go there because the younger chaps would have struggled to see anything in our bolt on seated terrace, where the only chance to sit was at half time if the person next to you decided to go to the loo. He made the choice not to go for fear of never being able to get back. 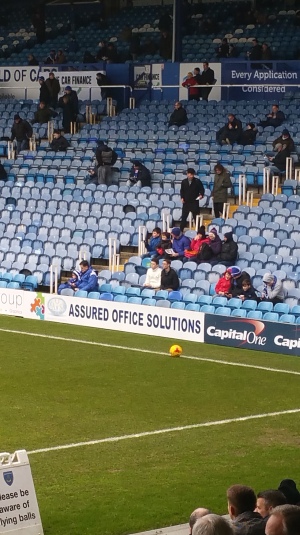 The second goal killed the game off as a close encounter. Up to then we had created chances and survived theirs. As we know, we could always do the fightback bit in the end. The side today, in my opinion, had several players playing to different scripts. The new old boys have plenty of experience on their C.V. Perhaps they were thrown in because it was a game of a large crowd and perceived pressure. Lawrence and Easter, struggled to keep to the Rovers high tempo style. Several others, namely Bodin and Montano have had limited recent game time and didn’t perform. Mildenhall pulled off a string of saves to keep us in the game and too late Chris Lines came on to add some deep running quality.

Post-Match Pubs
The No 1 circular pub took us to:- 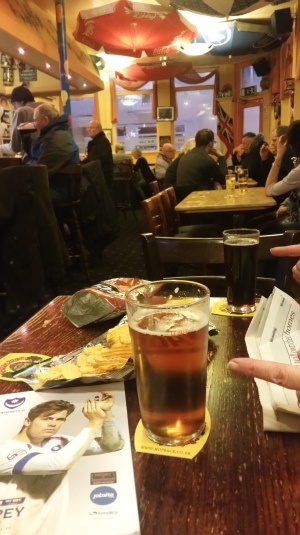 It is always good to come back again to Paul’s pub. We briefly chatted about the days when the pub was one of the poster boys for my guides. The beers are always good and need planning in their drinking. The order today would have to end with the Titanic Plum Porter so it went, Plain Sheep Dip, Island Vectis Memnon and then to the TPP. We were joined briefly by a couple of the London Gas occasionals. After comparing notes we continued our respective tours in alternative directions. The pub has the now familiar beach side interior, with upturned beer umbrellas on the ceiling. What is more the beers were changing before our eyes.

Stuart wasn’t behind the bar so I was spared some keg beer teasing and comfortably tucked in to a Dark Star Festival and an Irving Admiral. The pub was busy and the most crafty of the day. We settled to the back of the bar to polish off the crossword and read match programmes. The others had gone via Red, White and Blue then trains home. We were comfortably beer sated and sought out an Albert Road Goan restaurant before a taxi back to base.

Pub of the day: Sirloin of Beef