Or: A meeting of old friends with a common love.

Sometimes a game is so good and ultimately satisfying that you wonder why it can’t always be like this. We all know the answer to that one but still the thought goes along the lines of “if it can be good for others then why not us.” This morning, the day after the game, I have received Facebook messages from near and far and one from a very long lost friend Des, He is a Chelsea fan undergoing a tiny fraction of the pain we endure year in year out. We go back to some crazy Rugby playing years where he was mischief maker in chief for Sid’s Marauders, a Bletchley Rugby Club 4th XV. That team had then young players like me and Des, plus some seriously old boys who led the way into many a Buckinghamshire pub. This brought me to think about the various people we momentarily bumped into during a glorious away win at the Kassam.

Back to the usual first. The route today? Rose gave me a lift to BTM. The 10.30 train had a police presence all the way via Didcot to Oxford. The assembled team had the usual faces in Ronnie, Bob, Geoff the Pikestar and Peter de Meteor. Andy had gone to church so wasn’t on parade. A rarer companion was Marc who soon got in to the swing of betting on anything that moved or in one case didn’t move. Phil the Lion appeared to have a replacement in Lenny the Leopard. Nigel C and Tangent T made up the team. We were meeting up with The Lord at Didcot. (Just don’t ask!) Operation T.V.P. was in full operation. This involves avoiding the police wishing to round one up at the station and find us a convenient (for them) drinking space. We split up with a meeting pub in our collective minds. The Lord, bless his little cotton socks, decided to try and reconvene the group in the station under the noses of the earwigging oxymoronic Police Intelligence Unit. So we had a mad scene of the team ignoring his shouts to various friends and walking straight by as if in total ignorance. In similar chaos there appeared to be some confusion about the first choice of pub. Most went to meet the Leeds Gas group in the Chequers. Three of us set off to our first pub of choice.

This is an excellent and always roomy White Horse Brewery pub. We were welcomed by the cheery Cardiff City fan of a barman. Off to watch Bath City are we? he joyfully observed. “Ex-Policeman are we?” was my un-voiced reply. I would be rude and not start with a White Horse beer but the Everards Tiger. However, the Titanic Plum Porter was drawing me into a second. It was heavenly and I rarely say that about a beer. I don’t normally like beers infused with other stuff but this is the exception that proves the rule. The match discussions spread across the pub as Oxford fans of the friendly variety arrived to their pre match rituals. We took their advice on the next pub to try. We wanted somewhere new and were offered the following.

Some pubs are good because of a friendly bar fly. So it was in this case. There was a decent selection of beers and a TV screen showing highlights of the English Cricket slaughter in Johannesburg. Our obvious comments, having so recently been in Cape Town led to a conversation at the bar with a fellow member of the Barmy Army. I lost Bob and Ronnie in their recall of the West Indies and such. This smaller lunchtime group, if truth is to be told, was enjoying a bit of relaxed beer drinking time. Mine was an XT 6, bringing memories of Ruth in their sales team and Archers beer selling events. We were not to meet up with the others and that was O.K. for now.
The taxi company lives up an alley next to the pub. Marc wouldn’t have survived the temptations of an office within a Casino style slot machine den. We booked our return journey and were in the ground unusually early. I had enough time to join the lengthy queues for food and chat to some old friends. 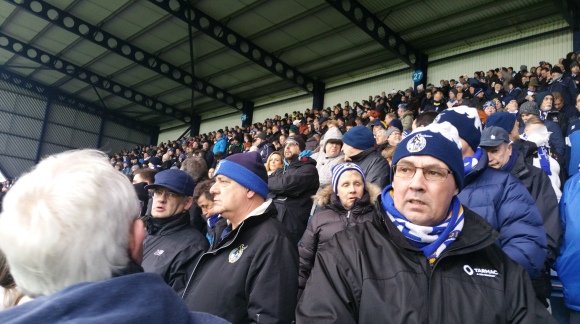 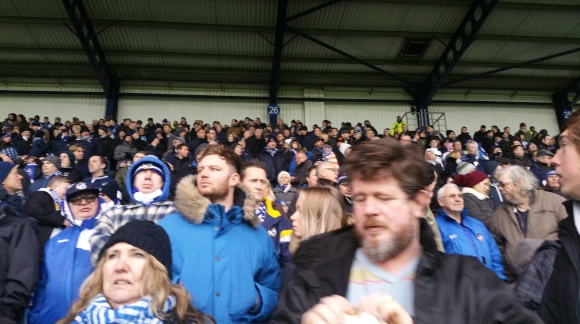 An 89th minute penalty winner. Sounds good. The stats suggested we were under the cosh yet this didn’t feel like a lucky robbery of a result. Oxford are a good side. They are pacey and patient. They forced a couple of good saves. Rovers could well have had the game wrapped up earlier despite the numbers shown on BBC sports stats. Two easy chances came and went before the emphatic thump of the Harrison penalty winner.
On the game my comments were about the team play. They didn’t alter any systems during the game. Leadbitter struggled in the first half but starred in the second. I personally would have taken Sinclair off at half time. He was unusually being beaten in the 50/50 challenges and when this happens he will up his effort, go chasing the ball more and then gets in the way of others doing their job. It nearly cost a goal as he got under the feet of our centre back. Quality showed through in Parkes and Lockyer. Ollie Clark came on to do a job really well in the final throws of the Oxford assault. The Gas were in loud party mode at the end. It was a time to hug, or in my case shake the hand, of old friends. Some appeared as if in one of those good dreams. Let me name drop one who you will not know. Derek Grail is an old Beach Boy. We played together in a good Patchway Old Boys team in the late 70s. He was the older head to this young, but big, 16 year old centre half. Roll on 40 years and we bumped in to each other at the foot of an Oxford stair case. That was that exit blocked for a minute or two. Like Stuart Taylor and Larry Lloyd of that time a massive centre half team was temporarily reunited only to go separate ways until we meet again at another distant game.

We had a taxi home. Royal Cars twice tried to seduce us into using them on the pretence of being the arranged person. Our circuitous route was sanctioned and along the way we picked up Roger Radio who was in the middle of his four mile, hour and a half walk to the station. Roger is a Rovers legend. His trip back to Southampton is a normal trial of persistence. He will not use the local buses, will stride out to many a game and is of the enthusiastic, all is good, type of fan. We dropped him off at the station an hour before his train. I like to think a good deed was done for one of our own.

XT Brewery now run this pub. They might want to think about buying some light bulbs. I am all for atmosphere brought on by strategic candle light but the unlit gents was a bit random so to speak. Three XT Beers and an hour to spend drinking them. Geoff had beaten us to the pub by public transport. I settled to Numbers 6 and then 4. Ronnie didn’t sing, so for once we were not threatened to being thrown out by the landlord. The game was suitably analysed and this small sub group had those self-contented smiles that 89th minute winners tend to spread.