Or: We came a long way for something.

Between match treks.
Our Boxing Day highlights included a drive along Cape Point to the Cape of Good Hope. This is the most south Westerly point of Africa, a peninsula with the Atlantic Ocean on both sides of it. 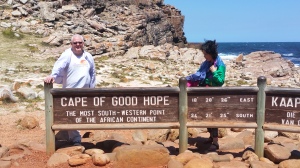 On match day I had booked the trip by cable car to the top of Table Mountain. You know I really love a good queue and this place has them both up and down. Add in a woman giving birth in the road on the route up, a hastily arranged bus shuttle service and soon my need was for a pint of something hoppy. No chance here now so on I went. Note to other tourists. The cable car rotates as you climb the hill side. It is as scary as…. I settled for a point facing the inner wall only to be told to take hands away from the safety rail as we were given unwanted fair shares of the 3000 feet plummet to the crowds below. One rotation in forty five seconds was more than enough for this quivering wreck. There were definitely no photos of the view beneath my feet. 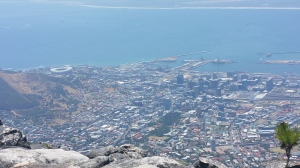 The views from the top are stunning. A table cloth was rolling in from the highest point of this cap rocked massif. Tourists like, but not actually me, jumped with glee on the most exposed rocks. A good stroll away from the hoards found some relative solitude. Too soon it was time to queue to go down. No relative priority this time. A full hour worth of line provided ample chance to meet the children of the world asking the same question as you moved towards the downward bucket of boom. “Yes this is the queue and no you are nowhere near the end of it.”
In the afternoon we had a Pick and Pay adventure to buy booze and food for our upcoming braai with the boys. This is a popular supermarket with a fine selection of Castle beers. The Dark is even drinkable in a fizzy keg sort of way. Of course we were settled in for ten to five.

This is how David Maddy saw it from the West Stand. 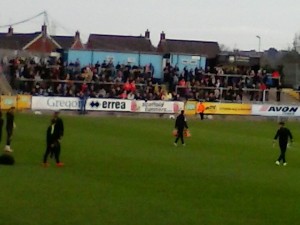 “I’ve taken the liberty of offering a ten minute before kick-off photo. 271 Orient fans. (I might have got that wrong as it means 216 more stampeded in before kick-off).”

This is how I saw it from Cape Town.

During the game I made the schoolboy error of announcing the score to Rose and Mary as 1-0 at half time. The pesky jay Simpson equalised on the stroke of half time. No doubt back at the Mem Damon missed the goal in his hunt for a half time pasty before the queue built up. I decided to go indoors where it was cooler and Sky TV offered a view of more results. Gaffers soon scored and to be honest the text updates suggested it looked a stroll to the end. The Stats looked up said they had more of the possession but experience says that this team can generally cope with that. My text MOM without being there was Rory G. I expect the team marks on the forums will give Ollie a low mark and Mildenhall will have poor distribution. I don’t care, we won and I was therefore happy.

Post match
It was time to fire up and test the industrial sized braai. Ronnie and Bob were in flight to watch the test. We had invited Hazel and Ian to join us on New Year’s Day. I am not a blokey bloke bbq person so the test was essential if I wasn’t to reduce the numbers in the barmy army by four on January 2nd. 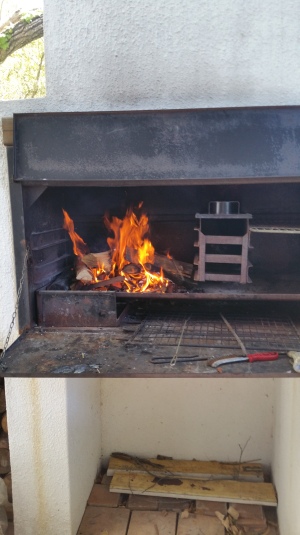 Next up Luton H