Or: The Day the Promotion charge began. (Mark my words) 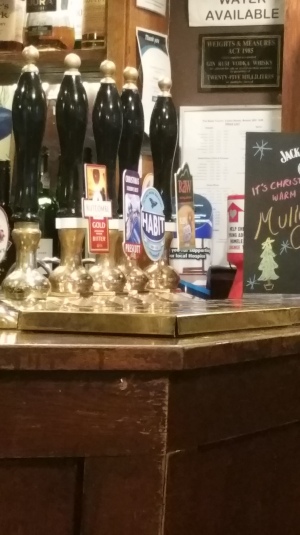 I arrived late. Silly old me thinking that an hour would be long enough to get from Cribbs Causeway to the City Centre by public transport. They, Ron and Bob, rightly chastised me for being so tardy. No apology would appease their wrath. Bob did eventually buy the first round. I like the beer choice in the Bank. Flying Monk Bad Habit was followed rather sharply by a Raw Brewery Baby Ghost IPA. There was plenty to catch up on. Trips to Moseley last weekend came for them. My Bristol tour had details for them. We arranged meetings in Cape Town for the future and final plans for today’s Christmas Party revelries were considered. Part of the attraction of the pub is the relaxed atmosphere. People came for food, oddly only food. A father and presumably his daughter’ settled for a game of scrabble. We left with the customary tut over the shoulder at the youngster’s tiles of I I I I L P and Y.

Down to the city centre and a now rare pre-match meeting with Martin in the White Lion. We moaned as usual about the Wickwar Brewery’s decision to not brew their delicious and of course, award winning Station Porter on cask. The first three people to come in rather supported our argument as they settled for the bottled version. Martin of course towed the company line by using this as evidence for the bottled version approach. By the time we left the pub had attracted a group of Brummie / Scots Christmas visitors. The Scot was an authority on the firms of Airdrie and Alloa. I suspect he was reliving his section B youth. The others were amused by the juke box, little knowing that Ronnie has a degree in picking rubbish songs for unsuspecting visitors to the pub. We left just before Jasper Carrot’s Funky Moped hit the air waves.

Taxi to the ground. 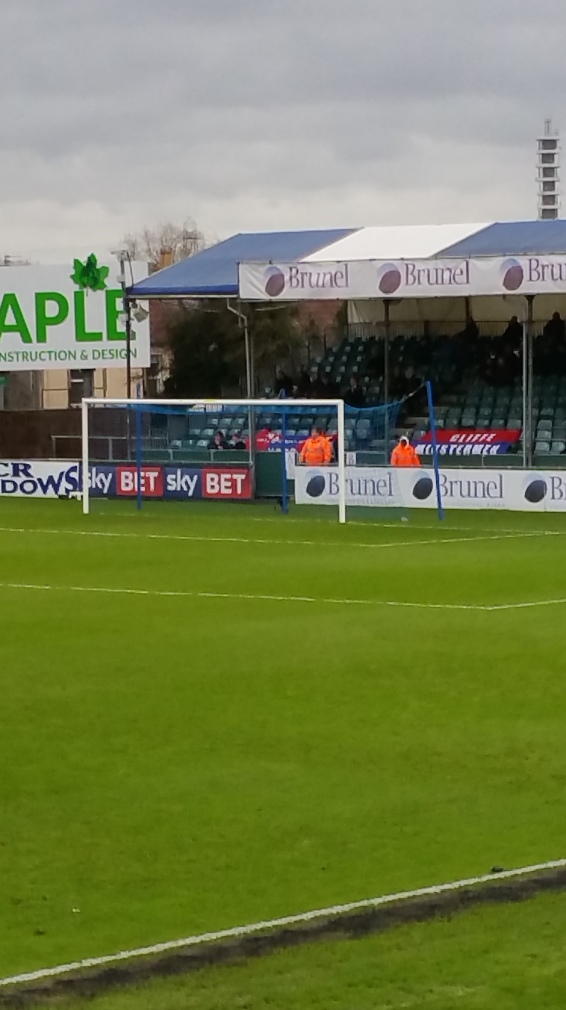 The 170 figure put many away sides to shame. York had drafted in new loanees to stiffen their resolve alongside a new manager. They lost their 9th consecutive game courtesy of an injury time Matty Taylor finish. Life is tough at the bottom of the league. I think they will eventually survive. They were better than many a team that has left the Mem with all the points this season. I particularly liked their left back Femi Ilesanmi. The Rovers wide men all had problems getting past him. Rovers didn’t play well but won. That is apparently a very good sign. My observation is a positive one. This team now has players that can come off the bench and win games. Easter, Gosling and Harrison can change matches. The others all have considerable and effective league experience.

It was rather like an impromptu Bristol CAMRA meeting in the Drapers Arms. Those who have read my last report, the Bristol Stroll, will know my initial thoughts. Rovers have a considerable and loyal bunch of Real Ale hunters. Today they had come together to test the new boy out. We found a bench seat after a short period of standing. The mid-winter warmth had created a rather steamy atmosphere, the sort of warmth that mists spectacles and warms the beer. One advantage is that with the door open it can be just five steps from beer to platform of the No75 bus to town. We had an appointment to meet so did this journey with some reluctance to tear ourselves away.

Rose met us in the pub. It was in full heavy metal meeting mode. This is a good thing if you have a retro view to Rock. Bob has a retro view to Rock. They were also now in a Dark Beer Festival. Six beers all were dark and varyingly heavy. I settled for a Dark Mild, warm and smooth. We had a short time scale and perhaps this pub deserved better attention from us. I do like the way that older, obviously not heavy metal rockers are welcome as well as the core clientele.

We had to be here by 7.15 sharp. Geoff had rightly demanded such punctuality. It was the annual Christmas dinner for those who travel as Lord Powell’s Gas Head Train crew. The Ship has been newly reinvigorated. The traditional Christmas Meal had some twists in the food offered. The thirteen of us made a passable imitation of a scene from the last supper. We toasted to the memory of John, Our Dad and chatted as one does after a long day on the pop. I am sure Geoff doesn’t know just how much we appreciate his efforts in finding the venues and corralling our particularly random flock of sheep. Rose, by a stroke of magical happenstance had secured a parking space up the hill from the pub. We left upwards as the others meandered down to the White Lion.

Next up: Dagenham and Redbridge Away. Saturday 19th December