Or alternatively: Memories that are best shared.

On the 21st February 2004 I sat in the stand behind the goal at Cambridge and wept. It was a silent cry, a lonely and sorrowful private cry of desperation. I couldn’t get any lower than I was that day. My world had, at that time just ended. I was guilt stricken, angry and desperate for the comfort that only your friends can provide. I was alone in the stand and as far as I knew no one cared why this blob of a man was feeling so down. I had escaped the news at the hospital and hoped the Gas might just cheer me a little, Fiona told me to go and I knew not to argue with her. Rovers were abject that day. Many fans turned their back on the team and left early. We lost 3-1 and I just couldn’t care. The following Tuesday night Fiona died.

Eleven years on and here we are. I picked up Ronnie and Bob from their work at exactly 12.36. We could have a leisurely drive across country to the game but they would have to indulge my diversions as I thought of anything other than my previous visits to that ground. We drove via Milton Keynes, stopping off to check out Manor Fields for their education. 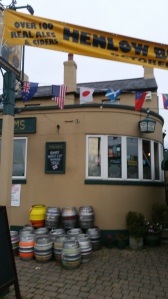 In a continuation of their education theme I took the chaps to visit this classic village real ale pub. We had some history, the Engineers and me. Way back in 2007 Kevin, the Landlord was kind enough to host one of the Football and Real Ale Guide book signing sessions. We sold a massive 5 books but that wasn’t the point. It was almost the last night out I had with mates from teaching. We were able to iron out a few of the foibles in what really were very early beer promotion sessions. We had created an impression. Today I decided not to chat with Kevin, he was in full good landlord mode at the bar. Rather that that, I posted on Facebook that we were there and sure enough he noticed and unknowing glances were exchanged. As we were leaving pennies dropped and we were able to chat about that night and then to top it all Kevin produced a copy of a guide from his library bookshelf. My ego suitably massaged we moved on. I was on the cokes but the boys were suitably impressed with the pub and its long list of beers. Their beer festival was last weekend but there was more than enough to suggest the pub still had a status to challenge, as it has done before, for the national pub of the year award.

The Cock at Broom 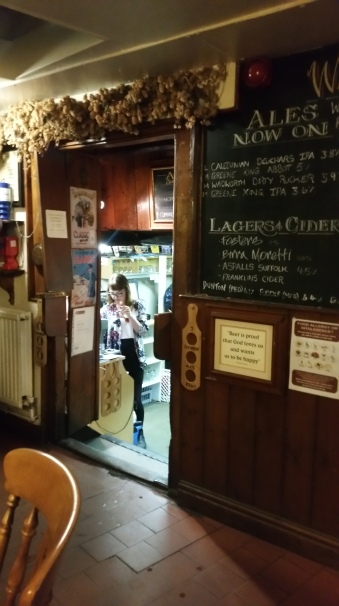 This was also a pub visited out of some nostalgic whim. Way back in the nineties we used to take charabanc trips from the Prince Albert in Bradwell, Milton Keynes to several rural pubs. The Cock at Broom was always something a little special. It is on the register of historic pubs because of its rare internal architecture. There is no bar, the beer is served from the steps of the cellar. There are many small wood panelled snugs off a small central stone floored corridor. The locals fill every space. The many beer tourists find private areas to chat around a table, i.e. one table per room. So why did we leave a little disappointed? It did follow our visit to the Engineers, difficult for anyone to follow, but that wasn’t it. The pub had four real ales, three from Greene King. Was our palate being spoiled when offered a limited range? Not really, the beer ways good according to Ron, and my Coke was certainly of standard fizziness. The locals were not particularly friendly. Perhaps we felt subconsciously as intruders to their private space? Two days later, while typing this I think I have it. It was the lack of a central landlord or landlady character. The pub had become efficient, tidy and well organised. It was not welcoming or full of the Engineer style bonhomie. It lacked that factor that makes one pub stand out, a boss who welcomed you into the pub as a friend. 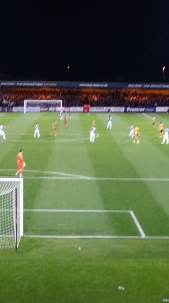 This game created a lot of discussion at the game and long into the next day. Six away wins out of eight now. It was comfortable in the end and could well have been a 4-1 win. The first half left us wondering if the promotion bubble was finally burst, but no, the Gas was turned on in the second half and three more points pocketed. Included in the 560 or so fans were Geoff, Lord Powell and Peter de Meteor who travelled by supporters club coach. They recounted tales of misdirection and passenger subterfuge that reassured me that such travel should remain a last resort. They did, however, find time to visit the nearby Wrestlers and came back with favourable recommendations.
I should mention the food. In the distant past it had well deserved good reviews. Their hot dogs were a particular speciality. The food now is o.k. but nothing special. Yet again the curry pies had run our but a pasty was available, if only of the soggy, floppy, variety. What deserves more comment is the service. There was a queue when we arrived or 20 or so. Half an hour later I got to the head of the queue that had grown considerably. I decided to do my own time and motion study. Six minute to pour a tea, put a pasty and a pie in a plastic tray and take my money. Six minutes! The young chap behind the counter was not alone. It may have been near to Hallowe’en but zombies working behind a food counter pre-match  is surely a recipe for disaster. 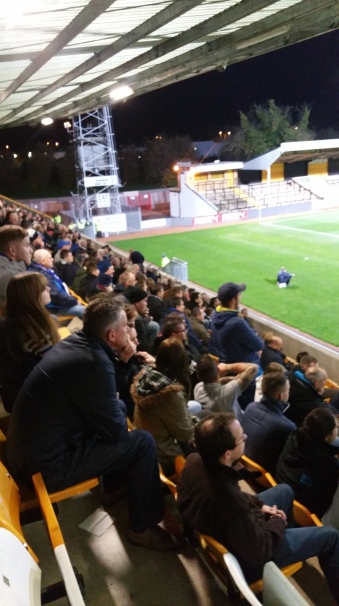 They were the merry disgruntled. While hundreds were getting their fill by a camera feed back to the Mem we had the full experience. Friend Ian made the obvious suggestion on twitter that perhaps the revenues from the night at the Mem might be used to pay the costs of those with wasted rail tickets or hastily arranged overnight accommodation. Bristol Rovers, kind and thinking of their fans? Have a word!

We were home by 1.30, tucked up by 2. The train to Cambridge was leaving at 8 so I had to get four hours sleep before heading back to Temple Meads to use the tickets without a game.

Pub of the Day: The Engineers Arms

Beer of the Day: Gun Dog Lord Barker (According to the other two)

Home to Chesham United in the F.A. Cup,  As it has been moved to a Sunday I will be meeting at the Welly. Who cares, The F.A. certainly don’t.